AAUW’s Value Promise — By joining AAUW, you belong to a community that breaks through educational and economic barriers so that all women and girls have a fair chance. 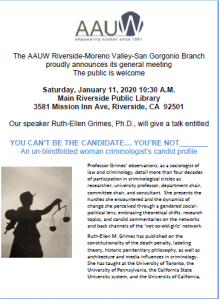 Our speaker Ruth-Ellen Grimes, Ph.D., will give a talk entitled YOU CAN’T BE THE CANDIDATE… YOU’RE NOT_______    An un-blindfolded woman criminologist’s candid profile. 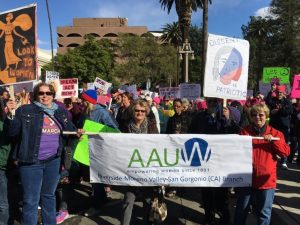 Daniel Hicken works at the Air & Marine Operations Center (AMOC) located on the March Air Reserve Base in Riverside which is part of the Department of Homeland Security and US Customs and Boarder Patrol. The AMOC is the nation’s only federal law enforcement center in the Western Hemisphere tasked to coordinate interdiction operations of criminal activity occurring on land, sea and air which can range from terrorism, hijacking, illegal drugs, human trafficking, etc.  Daniel began his career as an Air Force officer flying on E-3 AWACS surveillance aircraft stationed in Saudi Arabia. He was working in the FAA headquarters on 9/11. His work here at AMOC has included responses to Hurricane Katrina, the Christopher Dorner incident, the San Bernardino shootings as well as coordinating with the Secret Service for presidential air security.